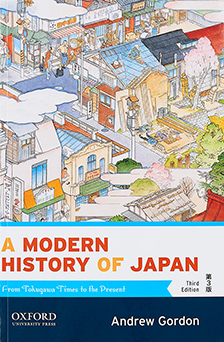 A Modern History of Japan: From Tokugawa Times to the Present

This important book recognizes Japan’s modern history and development in the context of, and as it is influenced by, global modern history. Japan’s modernization did not occur in isolation, and this sense of connectivity is the basis of author Andrew Gordon’s stance. By uniting outside influences with distinctly Japanese approaches, such as the heavy involvement of the state in economic and political problem-solving, Gordon maps the evolution of Japan from a largely feudal society to the world’s third largest global economy.
Gordon takes detailed detours through times of crisis and success in order to frame the social, political, economic, and cultural elements that constructed Japan as a modern nation-state. Core to his analysis are the evolution of political systems and the challenges faced by different administrations, such as austerity measures, popular resistance, and calls for suffrage. This narrative is punctuated by periods of military confrontation. Gordon addresses how these conflicts impacted Japan’s global standing at the time and illumines their long-term implications for international relations, particularly within Asia. In the modern period Japan strove to gain global recognition, build an industrial workforce, manage periods of economic recession, and reinvent itself as a peaceful nation. By including the popular impact of policies alongside the decisions of the powerful, Gordon paints a vivid picture of the highs and lows of the transformation of the Japan of then to the Japan of today. This is an indispensable book for anyone seeking an introduction to the history of the country.