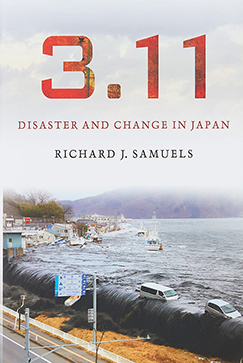 3.11: Disaster and Change in Japan

The cost of Japan’s earthquake/tsunami/nuclear disaster of March 11, 2011 in monetary terms was enormous. Official estimates put it at 16.9 trillion yen in the immediate aftermath, though Standard and Poor’s estimate ranges between 20 and 50 trillion yen. Assessing events from the perspective of institutional and policy changes, this book is a welcome addition to 3.11 literature. Author Richard J. Samuels offers insights into how the disaster has changed (and may in the future change) the political culture and structure within which Japanese daily life plays out.
The first chapter looks at the status quo ante—how prepared Japanese institutions and infrastructure were to respond to crisis—and how the government of Prime Minister Naoto Kan responded. The author shows that the welcome involvement of NGOs and the thriving of civic society were part of longer-term changes that made those NGOs better prepared and more experienced, as well as more accepted by the government. There is a fascinating account of how and by whom narratives of the disaster are created and reinforced—in this case, framed through the tropes of change, leadership, risk and community—and an interesting chapter on historical and international comparisons. The disaster brought greater legitimacy for Japan’s Self-Defense Forces as well as a more optimistic approach to the alliance with the U.S., and the author discusses how these shifts may be turned into long-term policy changes. The book explains how, despite frustrating systemic issues and continued resistance to change, the crisis stimulated a move toward more open debate and more transparent decision-making.