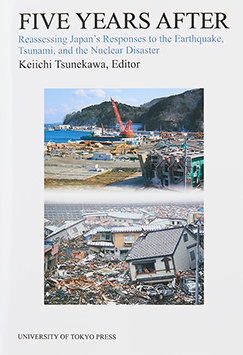 Five Years After: Reassessing Japan’s Responses to the Earthquake, Tsunami, and the Nuclear Disaster

This book evaluates national and local government responses to the triple disaster of 2011 during the five years designated by the Japanese government as an “intensive recovery period.” Editor Keiichi Tsunekawa and the other contributing authors examine disaster response from various points of view: national government, local autonomy, Japan-U.S. operations and foreign responses, and media responses.

The conventional reading of the response to 3.11 is that the central government and bureaucracy performed poorly in contrast to local government and organizations of civil society. This impression, the authors argue, may be due to the national government’s inability to cope with the deepening nuclear crisis at the Fukushima Daiichi power plant. However, this overlooks more effective initiatives taken elsewhere, such as the rapid dispatch of 100,000 Self-Defense Force personnel to disaster areas and the speedy provision of over 100,000 emergency habitats.

As well as emergency responses, the national government, in collaboration with local entities, was also responsible for reconstruction efforts, such as the building of more permanent public housing and the relocation of displaced people. The education system prepared all schools in disaster-hit areas for the resumption of the school year only a month after the disasters hit. Government departments were usually able to coordinate their activities far more smoothly than was commonly believed.

Although there were substantial problems concerning the government’s response due to political and bureaucratic infighting, these should not be overstated. A more balanced view of the overall emergency response and reconstruction effort suggests that government responses were in many ways more effective than conventional wisdom recognizes.