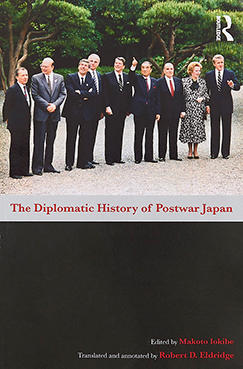 The diplomatic history of postwar Japan

Edited by Iokibe Makoto and translated and annotated by Robert D. Eldridge, this book discussing the history of Japan’s diplomacy and international relations from the end of the Pacific War to the early 2000s won the prestigious Yoshida Shigeru Prize of 1999. The authors of its six chapters, themselves leading lights on the subject, add depth and insight to their arguments by making extensive use of the most recently declassified Japanese documents, memoirs, and diaries. Also explored are the personalities of particular postwar Japanese leaders and statesmen who dealt with inherent tensions in Japan’s international affairs.
The book examines a number of issues that Japan had to confront in the postwar period. The periods are divided into each decade, from the U.S. Occupation in the latter half of the 1940s to independence, economic growth, the 1970s oil crisis, the bubble economy of the 1980s, Japan’s emergence as an international state, and the post-Cold War age of terrorism. The impact of the flow of international and domestic affairs on Japan’s foreign policy and international relations are discussed, as is the history of Japan’s diplomacy as seen in its relationships with neighboring countries in Asia, its allies, and other major world powers. It assesses how Japan succeeded in achieving its aims and offers pointers to Japan’s future development within the context of the global age.