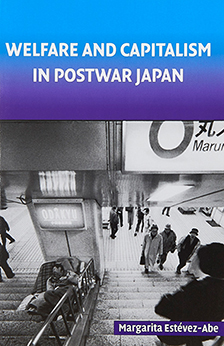 Welfare and Capitalism in Postwar Japan: Party, Bureaucracy, and Business

This wide-reaching study asks why industrial democracies combine specific types of social spending programs using Japan as a case study to expand the political and economic idea of a welfare state. In this case welfare is understood as including not only targeted social provision such as pensions, but functional equivalents, or “non-welfare” policies, such as agricultural subsidies.
Over nine chapters, the book uses a “structural logic” method to contextualise Japan’s policies within its political system-a method which works by seeing the Japanese electoral system and the personal vote as determining factors in incentivising the state’s approach to highly targeted forms of social protection. Simply, it makes better electoral sense to target social protection at specific groups than adopt comprehensive programs. This model has, over a series of historical shifts covered in chapters Three through Eight, resulted in what looks like a largely egalitarian society with meagre social spending programs, but is actually a fundamentally different approach to structuring welfare spending and provision.
The book poses two future scenarios for Japan. The first is one in which the same party gains control of both Houses of the Diet, moving Japan to the Westminster system. The second scenario is a tax increase, hinging on the idea that a divided government would be more likely to secure such an increase. The book serves as a useful pointer to readers on the contemporary relationships – and their fragilities - between different parts of the Japanese political system and the nature and role of welfare in Japan.