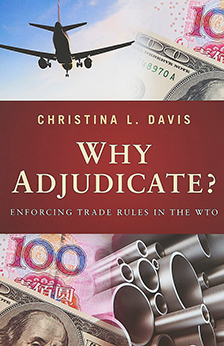 Why Adjudicate?: Enforcing Trade Rules in the WTO

This important book argues that the rise of international courts to adjudicate trade disputes between apparently independent and sovereign states has been an important recent development for international affairs. More and more often it is lawyers and judges acting through these international courts, rather than the traditional discussions in back rooms by diplomats, that shape, finalise and decide trade policy. The book seeks to find the reasons why states have turned to international courts for the mediation of disputes and argues that, rather than being an abdication of sovereignty, this use of legal process allows states to better put forward and defend their interests. In this view, international courts can ease domestic political pressures and pursue international cooperation.
The author outlines how and when states use international arbitration. Of particular interest are chapters on US trade policy and trade policy in Japan-a reluctant litigator but the frequent target of protectionist measures. The author looks at cross national adjudication patterns, trade patterns, the selection of complaints and dispute outcomes-finding, perhaps surprisingly, that litigation, as between China and Japan, often leads to better outcomes for both sides. There is an important discussion of the Japanese use of WTO adjudication to push back against US anti-dumping measures in the steel industry. The author makes the important point that the influence of US congress pushes to arbitration while the autonomy of the bureaucracy in Japan pushes towards negotiation. This is an important book that sets Japanese trade policy within a global trade system.