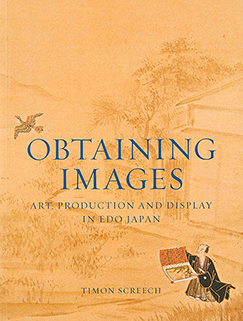 In the words of author Timon Screech, this monograph aims to be an “authoritative and conceptually rigorous” work focused on images, primarily paintings and prints, of the Edo period (1603–1867). It examines their multiplicity of purpose, and how they were obtained—meaning how they were produced, commissioned, acquired, and displayed. To achieve this, Screech eschews a chronological focus, adopting instead a thematically structured approach through which he tackles firstly the mechanisms of production and display, and secondly the central schools and styles.

Part I considers the meaning of artistic labor via the lenses of myth and legend: how was artistic creation understood and what purpose were images thought to have? Screech then examines the primary function of art in the Edo period, seeking an understanding in the space “between myth and hard fact” of why art was sought after at all. Screech looks beyond mere aesthetic enjoyment to contemplate the encoded meanings of auspicious images, including their symbolic force, double meanings, and even such challenging themes as illness and death. He addresses the processes of buying and selling in rich detail, following with a chapter on the power and significance of religious images.

Part II is a commanding examination of pivotal schools and movements: the Kano and Tosa schools, portraiture, literati painting, ukiyo-e, and, finally, artistic contact with Europe. Screech’s treatment of the extra-visual aspects of images gives this comprehensive history an impressive cohesion and clarity.