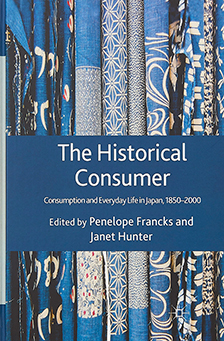 The Historical Consumer: Consumption and Everyday Life in Japan, 1850-2000

This collection of essays edited by Penelope Francks and Janet Hunter redresses how the bulk of research on the economic history of modern Japan has neglected the role of the consumer. Indeed the history of domestic consumption in post-Meiji Japan, apart from the industrialization and modernizing influences of the foreign powers that prompted the imperial restoration, has received little attention. Even less has been focused on the consumers themselves.

The essays are organized into three themed sections. The first, “Gender, the Household and Consumption,” examines consumption in the family unit, notably that arising from increases in labor-intensive housework and from shifts in inter-relations between consuming and producing activities. A particular focus is the consequential growth in demand for household goods and gadgets including sewing machines and rice cookers.

The second, “Tradition, Modernity and the Growth of Consumption,” considers how consumption growth was domestically driven, rather than a reaction to post-Meiji diffusion of western-style industrial products. By looking at consumption of non-western sugar, textiles, and traditional medicines, these chapters demonstrate how western industrialization and imperialism are only part of the story: the agency of, and interactions with, domestic consumption must also be considered.

Finally, “Space and Pathways of Consumption” contemplates the location of consumption, not as a single, one-off purchase, but as an act situated among institutions and mechanisms that drive decision-making. Relevant here are urbanization and the urban-rural divide. They are discussed in chapters that address the socioeconomic aspects of train travel and mail-order, while consumption as a gateway to social space is considered in the context of golf.