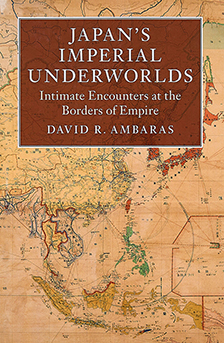 Japan’s Imperial Underworlds: Intimate Encounters at the Borders of Empire.

This book is informative and highly entertaining. A collection of microhistories of marginal lives, it introduces an overlooked aspect of the Japanese Empire without rehashing the grand narratives of Japanese expansion since the start of the Meiji era (1868–1912). Author David Ambaras tells of child traffickers, migrants, smugglers and pirates, people whose movement depended on different conceptions of legitimacy and necessity than official state-led discourses of empire. The microhistories outlined in the book give us an opportunity to view empires, nations, and communities from their frayed edges and unstable borders.
Chinese traders in children in the treaty ports, women emigrating to China for marriage, and people such as Sueko Nakamura, a fisherman’s daughter and qualified teacher from Hokkaido who eloped with her Chinese boyfriend and became the co-leader of a notorious band of Chinese pirates marauding the Taiwan Straits, provide an alternative glimpse of life in the Japanese Empire. When Nakamura was forcibly repatriated in 1935, after a shootout between rival gangs in the streets of Fuzhou, she was celebrated in the press as the fallen woman teacher who became the chief of a group of pirates. Yet this book shows how, in the context of revolutionary upheaval in China during the 1920s and 1930s, her story challenged the power of the Republic of China and Japanese interests. Ordinary people on the lookout for a better life became caught up in an emotional discourse of Japanese vulnerability and Chinese predation. Such historical perspective helps us better understand current discourses on Sino-Japanese relations.