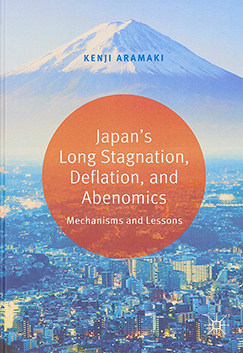 This detailed and well-researched book examines the Japanese economy over the last 30 years. Since the 1980s, Japan has been beset by difficulties rarely witnessed in advanced economies: the formation and collapse of a huge bubble, two decades of economic stagnation, and chronic deflation. Through its five chapters the volume deals chronologically with the mechanisms that drove the economy through this extraordinary period and points the reader to some lessons for future economic policy and management.
Casual lending by banks during the 1980s, and an economic policy that concentrated more on external markets and trade competition with the U.S. than on the domestic situation, allowed the bubble to develop. Risky financial activities went unchecked, and author Kenji Aramaki tries to understand what could have been done to prevent, or at least allow those involved to see, the risk of a land price collapse and why the tightening of monetary policy and the limits on real estate-related lending that followed collapsed the bubble and put the economy into recession. There is also a detailed assessment of the policies instituted since 2013 (so-called Abenomics). The author concludes that the assumption underlying the Japanese social system—that the population and the economy would continue to expand—needs to be rethought. The book places a significant focus on the analysis of company behavior, to which it takes a data-centered approach. Graphs and tables, as well as readable explanations of important financial terms and economic mechanisms, make this work essential reading for anyone wishing to understand the Japanese economy today.