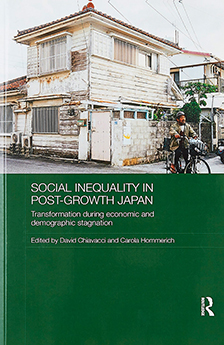 “Gap society” (kakusa-shakai) is a term applied to the Japan that has emerged from the post-bubble so-called “lost” years. In direct contrast to normalized narratives of middle-class homogeneity, this new model takes inequality as its base, identifying the economically vulnerable and socially excluded groups that have emerged from the overlapping demographics of stagnated economic growth, an aging population, and a declining fertility rate. Whether social inequality has been exacerbated by such fundamental structural changes, or whether the nation was never as egalitarian as formerly assumed remains to be answered. What is undeniable, this collection of essays shows, is that the inequality is there, it is complex, and it requires deep-seated reforms in order to be remedied.

Edited by David Chiavacci and Carola Hommerichs, the compendium considers how personal and collective agency interact in the production and replication of inequality. Specific case studies address five key areas: the labor market and the employment system, the welfare state and the family, education and social mobility, the divide between urban and rural, and immigration and ethnic minorities. Gender is also considered as it applies commonly to all of the above.

Addressing the increasingly polarized gaps in wealth, income, and social reward, as well as the fear and anxiety of the privileged who fear loss of status, the work reveals a compelling picture of social inequality in contemporary Japan.