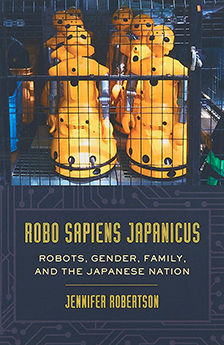 Unlike the robot-populated, dystopian futures often depicted in the West, in Japan robots have long been embraced for their convenience and potential companionship. While an Astro Boy-esque humanoid remains a fiction, the accelerating pace of development in robotics technology is bringing the robot, in an increasing variety of guises, deeper into Japan’s intimate social spheres.
Author Jennifer Robertson pivots her book on an examination of “Innovation 25,” Prime Minister Abe’s visionary blueprint for the socioeconomic revitalization of Japan through robot technology, particularly in the household. For all its next-generation technology and promises of time wealth, she argues, the longterm plan and its concepts are a platform for innovation-as-renovation using “retro-robotics” and “retro-tech,” new tools designed and deployed to reify old values. She points to how the reliance of robotics on state support leaves it vulnerable to state ideologies, which it comes to mirror and embody.
The patriarchal and conservative values that arguably shape “Innovation 25” mean the strategy accepts as unproblematic the existing sexed and gendered division of human labor and social space and indeed tacitly encourages uncritical reproduction of such in robot design and application. Gender aside, Robertson examines how robotics in Japan reproduces—and therefore reinforces—norms and expectations regarding (dis)abled bodies. She also considers questions surrounding the granting of “robot rights” and membership in Japanese nationhood.
Japan’s robots are “imagineered”: imagined as solutions to socioeconomic problems then engineered in that image. But critically this imagination is rooted in a nostalgic past and aspires to a traditional future—albeit one populated by robots functioning alongside humans.