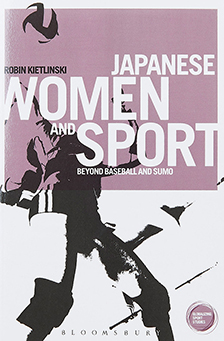 Japanese Women and Sport: Beyond Baseball and Sumo

The hegemonic stereotype of the weak and delicate Japanese woman, confined to domestic spaces, is challenged in this revealing study of a previously underexplored area of modern history, namely Japanese women’s participation in sport.
Kietlinski first situates her topic within wider contexts: the sociopolitical role of sport in Japanese history, women’s sport in East Asia, the role of the Meiji “enlightenment” drive that saw physical education introduced for girls. She goes on to trace the progress of women’s participation in sport across multiple disciplines, examining pioneering figures and milestone achievements against domestic socioeconomic change.
Central to the study are captivating portraits of trailblazing women athletes, discussed alongside contemporaneous media and popular reaction to their achievements and how, often, such reaction was informed by conservative attitudes towards gender, including notions of physical inferiority, the boundaries of “womanhood”, and the acceptability of focusing on sporting excellence over marriage and motherhood. Japan’s first female Olympian, Hitomi Kinue, for example, suffered deeply negative commentary for her supposedly “unladylike” athleticism, to the extent that her biological sex was questioned publicly. While over time this public interest has become positive, in parallel with greater financial and emotional investment in sporting excellence, particularly internationally, when directed towards sportswomen it remains highly gendered and clearly sexualized.
It would also, Kietlinski cautions, be a mistake to assume that the popular support for women’s sports, or the semblance of parity in Japan’s commercialized sporting industry, translate seamlessly into support for women to excel in other spheres of Japanese society.