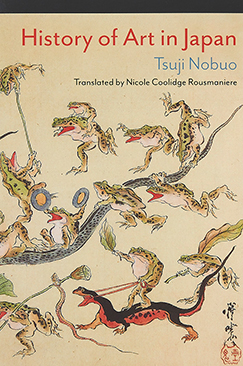 History of art in Japan

The daunting task of covering Japan’s exceptional history of artistic expression in a single volume has been taken on masterfully by author and leading art authority Tsuji Nobuo in this fully-illustrated overview. Beginning with prehistoric Jomon culture, with its “dynamic, magical” patterned pots, Nobuo walks us through distinct eras and distinctive movements in Japanese art, noting the influences—continental, religious, economic, social, ideological—behind and within each.
Its encyclopedic scope sees paintings, ukiyo-e, ceramics, and sculpture discussed alongside armor and architecture, as well as the “kaleidoscope of styles” that have emerged since the 1960s, including the mediums of manga and anime. Interestingly, Nobuo notes that “art” did not exist as a concept in Japan until the term bijutsu was introduced in the Meiji period as an equivalent to Western “fine arts”. Until then, the focus was on gigei (“skill”) and ko (“the act of making”). The artist did not exist—rather, it was the potter, the weaver, the lacquerer, who created skilled and specialized works.
Throughout the book, Nobuo examines outside influences—he describes artistic production in Japan as “an orchard irrigated by…nutrient-rich streams flowing from across the Asian subcontinent”—while also searching for the “core” of Japanese art, something he argues can be found in the three distinguishing concepts of adornment, decoration, and playfulness.
The award-winning English translation of this book has been some ten years in development; the translator, Nicole Coolidge Rousmaniere, has captured Nobuo’s characteristically authoritative yet engaging style in this illuminating journey through time and aesthetics.