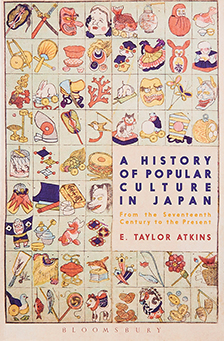 A history of popular culture in Japan : from the seventeenth century to the present

Pikachu, Sailor Moon, Godzilla, Hello Kitty: most readers will recognize at least one, but it takes a book like this to reveal the four-century-strong foundation of Japanese popular culture—“J-Cult”—upon which such icons now stand.
Author E. Taylor Atkins begins with his definition of popular culture. He takes a more nuanced approach than the simple hierarchy of popular culture versus capital “C” Culture, considering such contexts as rural folk culture, mass urban culture, and counterculture. He then introduces the formative social and economic conditions that provided the necessary basis for popular culture to flourish alongside the products themselves, for example woodblock prints, erotic shunga, Kabuki, etc. Atkins points to popular culture as the zoku (vulgarity) to Culture’s ga (elegance), and acknowledges that in early modern cities popular culture was all about “scatology, sex, spectacle, and dissipation.” Unsurprisingly, then, the book also covers the challenges of censorship: the governing elite’s (ultimately unsuccessful) attempts to curb the “depravity” of culture created and consumed by nongoverning classes and its perceived menace to the existing social fabric.
The narrative continues through the Meiji transformation and the cosmopolitan modernism that followed, then onward to post-Meiji empire-building and the Pan-Asian cultural flows that resulted as Taiwan, Korea, and mainland China both consumed and changed J-Cult.
Yet this is no dry chronological history: Atkins makes rich use of humor and contemporary American popular cultural references to deliver a frank and fascinating meta-analysis of the shaping of a J-Cult that today captivates audiences with its creativity, craftsmanship, and uncompromisingly complex notion of cool.