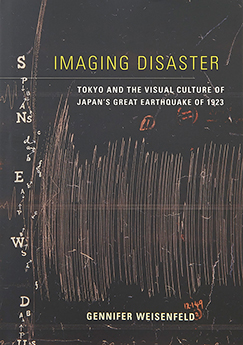 Imaging disaster : Tokyo and the visual culture of Japan’s Great Earthquake of 1923

Author Gennifer Weisenfeld’s expansive study of the visual production of disaster takes as its subject the Great Kanto Earthquake of 1923, which caused an estimated 140,000 deaths in the Tokyo–Yokohama area. As devastating in terms of loss of life and material damage as it was, the temblor also struck at a time when Japan was casting tradition aside for modernity. It became a metaphor for both the destruction of tradition and the fragility of modern society.

Today, we are “unwitting voyeurs” to disaster, as images are relayed to us instantaneously and across multiple platforms. Although the immediacy was different in 1920s Japan, Weisenfeld sifts through multiple contemporaneous genres—photography, film, visualizations of scientific information, hand-produced prints, paintings, sculpture, cartoons—to construct a visual lexicon of the event and to address the mediating role of that lexicon with regard to historical narratives.

Weisenfeld traces representations of the disaster over a seven-year period, encompassing the voyeuristic and macabre, the romantic, the nationalistic, and the political, while noting that visual representations in fine art and mass media are mutually informing rather than mutually exclusive. Her discussion ranges from the facticity of photography in the immediate aftermath, to later artistic interpretations playing on the “shock” of modernism, to political cartoons that use humor as a critical tool and beyond, weaving a rich conceptual model for how art and visual culture produce “modes of seeing, understanding, and, eventually, remembering.”