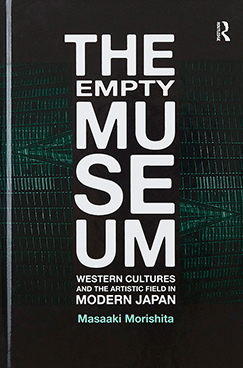 The empty museum : Western cultures and the artistic field in modern Japan

Author Masaaki Morishita makes a significant contribution to the field of museum studies with this thoughtful examination of the phenomenon of the “empty” museum. In stark contrast to the prevailing Western model of the museum as necessarily comprising substantial collections and permanent displays, the “empty museum,” with no permanent exhibits nor a collection-based practice, serves rather as a space for temporary exhibitions of objects on loan.

The emergence of the empty museum is considered in several contexts: theoretical concepts of transculturation and of “field” as defined in social theory; Japan’s contemporary artistic field in the run-up to the establishment of its first empty museum (and particularly the impact of newly prevalent Western influences); the establishment of that same museum, the Tokyo Metropolitan Art Museum, in 1927; and the iemoto artist and art group system. In particular, the iemoto system, wherein successive eminent predecessors handed down traditional styles and skills, is important in understanding the emergence of the empty museum: the agenda of such orthodox heredity, widespread in cultural activities in the Edo period, was a dominant force in driving “emptiness.”

Later chapters look at the development, in the postwar museum landscape, of curatorial authority and its challenge to art-group dominance. Morishita focuses on the Kanagawa Museum as an example of how curators of empty museums conceived of a “universal” history of Japanese modern art, rather than conforming to “sectionalized” canons, while also embracing avant-garde and regional art, and in the process began to change existing power relations.