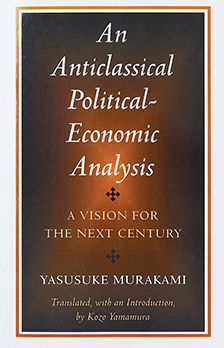 An Anticlassical Political-Economic Analysis: A Vision for the Next Century

As Director of the Center for Global Communications at the International University of Japan, Yasusuke Murakami, the author of this important book, was well placed to offer a critique of modern economic and political thought. Seeing the idea of progress (progressivism) as deeply imbricated in western political and economic philosophy, Murakami seeks to provide a new way of thinking about the global, as much as the national, political economy in light of the important challenges posed by the 21st century. For the author, industrialization has been the driving force of scientific and technological development over the last two centuries, and it is this that has sustained the classical approach to thinking about the political economy.
Ten chapters deal with various pillars of traditional economic thinking. The book argues that the idea of civilization marching us along a unique path to the ideal social and political system is deeply rooted in the Western Enlightenment. This ideal has been nurtured by the progress of science, technology and rampant industrialization. The author presents “polymorphic liberalism” and “understanding” as ways to overcome the impasse faced by progressive thought. The fundamental problem, according to Murakami, hinges on three conceptual axes: nationalism/anti-nationalism, industrialism/anti-industrialism, and equality/liberty. Understanding between nations, but also importantly between individual human beings, is necessary to combat the challenges we face in the 21st century. As the distillation of a life spent thinking and writing about political economy and studying the political, economic and cultural transformations of human society, this book is essential reading.