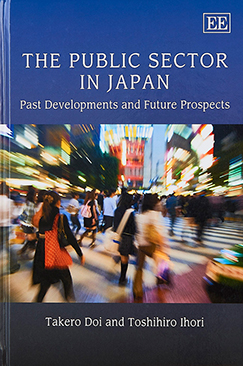 The Public Sector in Japan

There have been vast changes in the Japanese economy over the last three decades. After 1945, the rebuilding and recovery of the country, its infrastructure, its domestic and international markets, as well as the fundamentals of everyday life, were in large part carried out by government institutions. The role played by large and powerful government agencies, such as the Ministry for International Trade and Industry (MITI), in promoting recovery and then rapid economic growth is well known. This readable and well-researched book begins by outlining that important period. Authors Takero Doi and Toshihiro Ihori, both seasoned economists, then go on, in eight chapters, to analyze policy-making in the Japanese public sector using various theoretical models.
The book explores many of the important issues facing Japan’s economy during the past three decades. Topics such as social security, the aging of society, demographic change, public finance, deregulation, and government debt are brought to the fore in a readable account backed up with thoroughly researched empirical examples. The authors also offer a useful comparative perspective. There is plenty of evidence from OECD figures to set the Japanese public sector against and alongside other countries that are similarly developed—in particular, the U.S. and in Europe. In its comprehensive examination of the role of the public sector in Japan’s economy, the book undermines many misunderstandings surrounding the relationship between the Japanese state and the economy, and provides policy suggestions that will be of interest to the casual reader as much as those involved in policy-making and analysis.