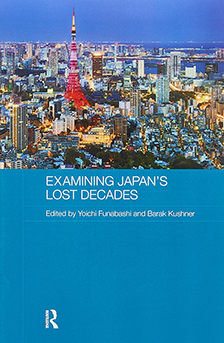 This authoritative collection of essays edited by Yoichi Funabashi and Barak Kushner was conceived as an intellectual framework for understanding Japan’s “lost decades,” the period from around 1990 to 2010, by placing diverse socioeconomic aspects of that period under a critical lens. During those two decades “turning Japanese” became a cautionary phrase, something for other developed economies to stridently avoid. The economic risks and problems experienced by Japan, however, were not syndrome-specific but rather of universal relevance, with lessons pertinent to all economies.

How did Japan go from “vibrant and positive” to “stagnant and dark”? What were the forces that made it so incapable of effective reform? Why was a robust, holistic analysis needed to offer policy remedies so lacking? Who lost the most and who is still losing? And what, if anything, brought Japan back from lost to found?

The descriptor “lost” here applies to many things: birthrate decline, working-age population decline, depopulation, economic downturn, drops in stock and property value, deflation. Each of the 15 chapters tackles a different aspect of loss, whether absolute or measured relative to countries that maintained growth over the same period. Factors and causes are various: some chapters point to vested interests, others to institutional conservatism or organizational rigidity, others elsewhere still. Seen as whole, it becomes clear that, while effects have multiple causes, a common thread does run through the lost decades: regulatory, institutional, and policy failure going unchecked for far too long by rapidly changing government administrations uniformly incapable of implementing long-term, effective, radical reform.