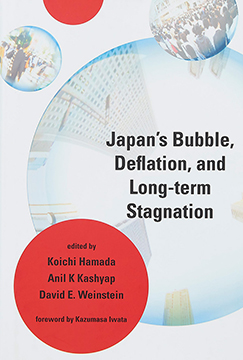 The book was published in 2010 in the wake of the global financial crisis of 2007/8 that followed the collapse of the U.S. real estate market. The collapse of financial and real estate markets in Japan in the early 1990s bears striking similarities to the events of 2007/8 in the U.S. The aim of the book is to apply standard tools of economic analysis to uncover the policy lessons that can be learned from the creation and collapse of Japan’s economic bubble, and the economic stagnation that followed.

Edited by Koichi Hamada, Anil K. Kashyap, and David E. Weinstein, the book addresses three main questions: Why did only Japan experience deflation and long-run stagnation? What lessons has the world learned from Japan’s “lost decade”? How should economic policy today and in the future be conducted based on those lessons? It concludes that Japan’s experience can be divided into two distinct phases, the first from the early 1990s until about 1997, and the second following 1997. The first phase was characterized as a normal economic recession, but the second phase was more serious as structural deflation became embedded.

The contributing authors conclude that Japanese policy-makers reacted rather slowly to the collapse of financial markets in terms of cutting interest rates and supplying liquidity to markets. This was perhaps because, unlike in the American case, property markets continued to rise for two more years, meaning that inflation was still a concern. This important book helps us better understand the economic impact of a significant period in contemporary Japan.