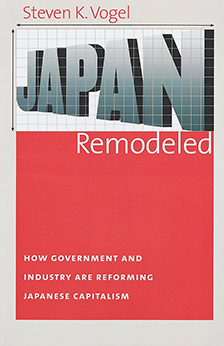 Beginning in the 1950s, rapid economic growth made Japan an example for developing capitalist countries around the world. Thirty years later, Japan seemed to have found the secret to building successful cooperative relations between government and industry, finance and manufacturing, and labor and management. The country was hailed as a model for the developed world as much as the developing. This important book examines the period since the 1990s. The bursting of the “bubble economy” and rapid decline in Japan’s economic growth meant that, by the late 1990s, it appeared that the Japanese economic model had failed disastrously. For many the only response was convergence with U.S. style market-driven capitalism. Now, 30 years on, many still see a failure to break with postwar Japanese capitalism as the reason for entrenched low levels of economic growth.
Author Steven Vogel argues that the Japanese government did undertake collective reform, but the end of LDP hegemony, the loss of any public consensus on the goals of fiscal and economic policy, the decline in bureaucratic authority, and the weakening of large integrative interest groups appear to have made reform of the Japanese capitalist system more difficult. To better understand the changes since the 1990s, the book shows how the Japanese capitalist system is best understood as a continually and incrementally changing system. Using comparative data from Germany and the U.S. to highlight social and political issues, this book is important for its insights into the nature of Japanese capitalism in the wake of the so-called “lost decades.”