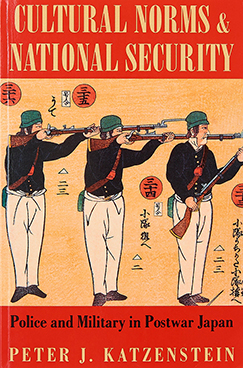 This book suggests that certain norms must be considered in order to fully understand the reluctance of the Japanese police to use violence and the Japanese government’s disinclination to make use of what amounts to a standing army (the Self-Defence Forces).
Among these are norms which the author calls “constitutive.”
In searching for reasons why contemporary Japan eschews police and military violence, the author concludes that these have their uses and that “norms matter for national security policy.”
In the cases of “international terrorism” for example, the Japanese government has been reluctant to give up its non-violent stance, and in the case of domestic “terrorism” the police have taken a merely defensive position.
Among the author’s conclusions is the prediction that Japanese security policies will continue to be formed by its domestic norms rather than by any international balance of power.
A nation’s values shape its evaluations of national security.
Though Katzenstein does not regard himself as a Japan expert but rather as an expert in political economy, his findings are welcome.
In focusing on the police and military, he is the first to treat both comparatively in an English-language volume.