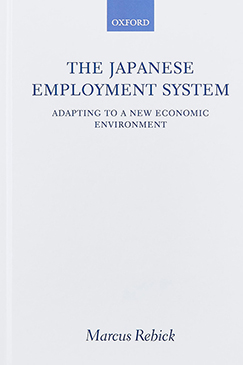 That Japan’s economy underwent a dramatic shift after the asset bubble collapse is undeniable. What is less clear is how the employment system has adapted in response to subsequent economic uncertainty. Has there been a radical break with the past, or is there prevailing continuity despite superficial change and reform?

Author Marcus Rebick’s meticulous analysis is predicated on two assumptions: first, that the core features of Japan’s employment system remain unchanged (any rise in redundancies, he maintains, may be considered normal restructuring in a challenging economic environment), and second, that employers are adapting to economic changes by adopting new strategies, primarily the use of atypical workers.

Rebick cuts through the complexity inherent to any discussion of labor markets with an accessible text that includes careful explanation of mechanisms and institutions. Excessive data is eschewed in favor of addressing wider questions: continuity versus discontinuity, and whether the growth of atypical employment is a primarily a demand- or supply-side issue, for example. Related topics including women’s employment, collective bargaining, personnel management systems, and performance-related pay are also considered.

The book is organized into three parts. First, Rebick presents an overview of the Japanese labor market up to the 1990s. He then looks at institutional change: the treatment of core workers, new compensation systems, the use of atypical employment, and industrial relations. The third section comprises an extended analysis of labor market trends, including specific markets where atypical employment—namely the hiring of women, older workers, and youth—is common.