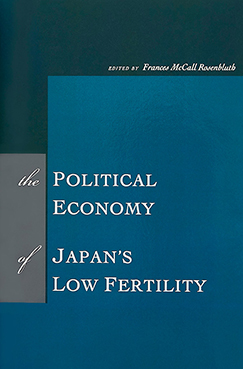 Japan’s birthrate is low, far below the population replacement rate. Economic and fiscal implications are often the focus of discussions about low fertility, but this interdisciplinary collection of essays edited by Frances McCall Rosenbluth is interested in the fertility rate as a marker of female welfare.

In general, higher fertility rates correlate to greater female employment, while lower numbers can be indicative of barriers that prevent women from accessing labor markets and the childcare options the enable them to balance family and career. This book’s core hypothesis, that fertility “tends to be depressed where vested interests impede female access to the workforce,” is expanded upon in nine essays by political scientists, sociologists, and economists who apply gender-conscious analysis to their particular topic: gender bias in skills policies, daycare centers, the privatized education market, clerical work, (failures of) policies to support working mothers, and so on.

Clear, concise, and controversial, this collection presents the many reasons why Japanese women are choosing—or feeling forced to choose—to have no children, in particular the “dreary trade-off” between taking on primary childcare responsibilities and having a fulfilling career. It puts forward a number of policy suggestions, noting, for example, that women are under-consulted in the shaping of parenting leave and childcare policies. Overall, however, the problems contributing to Japan’s low fertility are complex and need more than a quick policy fix. What is clear-cut is that, faced with such constraints as employment discrimination, patriarchal cultural norms, and gendered expectations regarding childcare and the division of household labor, women in Japan are escaping from an “unsought role” by choosing to be childless.