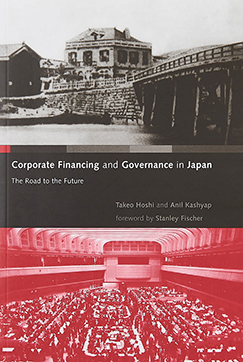 Corporate Financing and Governance in Japan

Although nearly two decades old, this award-winning narrative history of the Japanese financial system, its institutions, users, and regulatory environment, provides an impressive long-term overview of the shocks, disruption, and changes the system underwent as Japan navigated through the Meiji restoration, major international conflicts, and latterly globalization and deregulation.
The authors approach this tale of systemic evolution by breaking the some-130 years covered into four distinct periods, each framed through analysis driven by financial theory and supported by data and original case studies. Those periods are: post-Meiji restoration through to the mid-1930s when war preparations began; mid-1930s through to Allied-led postwar economic restructuring; the period of miraculous economic growth between the early 1950s to the early 1970s, when Japan emerged as an economic juggernaut powered by a mature system of keiretsu finance; and a period, to 2001, of slow “Big Bang” deregulation designed to bring Japan’s financial system more in line, structurally, with the global norm. The final chapter looks forward to the future – now the present – of Japan’s financial system, suggesting the shift from bank financing to capital market financing will continue to grow, with banks restructuring and diversifying in order to survive decline in the ascendancy of securities markets.
Having examined the past, present, and future of the Japanese financial system so comprehensively, the authors conclude, persuasively, that any uniqueness in said financial system is superficial: institutional and individual (saver, borrower) behavior can be explained through standard economic analysis without recourse to any theories of cultural specificity.