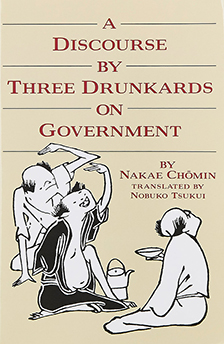 A Discourse by Three Drunkards on Government

Nakae Chomin (1847-1901) studied in France, where he translated Jean-Jacques Rousseau into Japanese.
Back in his own country he coined the Japanese term for“democracy,” and, in 1887, wrote this famous political allegory, Sansuijin Keirin Mondo, about three drunkards arguing about government.
These three archetypes stand for the then dominant Meiji political makers.
One is the Europeanized intellectual, another is of a rougher kind, a sort of reincarnated Saigo Takamori, noted loyalist hero, and the third, Nakai Sensei, is Nakae Chomin himself.
They discuss the merits of democracy, making this treatise one of the first to reflect Japanese interest in the subject.
The “gentleman of Western learning” is all for it, the “champion of the East” is not so sure, and Master Nakai presents himself as the sage who “loves drinking and discussing politics.”
Their questions and observations were central to the political thought of 1887, when concern over government and foreign policy was paramount.
How to achieve democracy and how to win peace are still major issues in Japan, which is one of the reasons that this earliest writing remains so influential now, and why there are a number of contemporary politicians who strongly resemble these three.