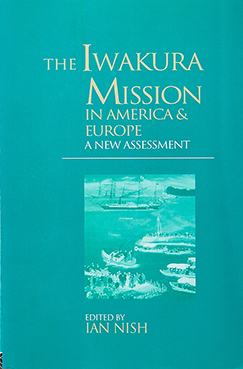 The Iwakura Mission in America and Europe: A New Assessment

Most of the essays in this collection derive from the 1997 European Association for Japanese Studies Conference, all reflecting on a single event.
This was a major event in Japanese diplomatic history—the visit of the Iwakura Mission to America and Europe in 1872-73.
True, it was not the first Japanese mission, and it did not accomplish many political aims, but it was composed of the most distinguished officials, many of whom had played important roles in the Meiji Restoration.
The Mission had a number of intentions, its primary purpose being to accomplish the revision of the unequal treaties Japan had been forced to sign.
Here the Mission failed in that no country visited was willing to consider treaty talks.
Its other intentions were more successful.
One was to learn about the scientific and technological feats of the places they visited.
Another was to discover a proper political “model” for the country to emulate.
They found their model in Germany.
Even though the primary aim of the Mission was not accomplished, much else was.
Diplomacy was but one aspect to be looked into.
Another was to learn of the scientific accomplishments of the West and in this it succeeded.