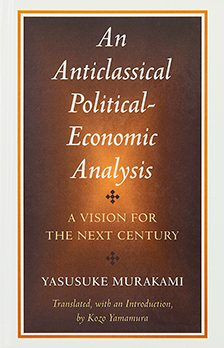 An Anticlassical Political- Economic Analysis: A Vision for the Next Century

This important and influential book questions the venerable concept that social progress is unified and unilateral.
Standing against this “classical” definition, the author proposes many reasons for such “progress.”
In so doing he indicates a new way that social scientists can think about central questions such as development, wealth, power, and international relations.
And he does so from a Japanese perspective that is global as well as local.
By classical analysis Murakami means an analysis of power politics based on the nation-state system honoring the neoclassical assumption that competition and free trade are fundamental bases.
His own analysis takes the form of a concept the author calls “polymorphic liberalism.”
This he then applies to three questions.
How can a stable post-cold-war world-order be created?
How can necessary economic performance be achieved while conflict and environmental deterioration are minimized?
How to safeguard the freedom of all peoples?
These cannot be answered by the nation-nation system at present in use which holds that unimpeded competition and free trade are reliable bases for increasing wealth for all.
New paths must be sought and one message of this book is that the model of Japan offers some opportunities.