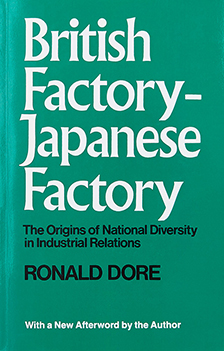 The way that the Japanese work is often perceived as “different.”
The author here sets out to find how different and why.
He is not interested in impressionistic East/West comparisons but in making a strict comparison of two Japanese factories with two British ones making similar products.
The first half of his book illustrates the attitudes and assumptions that underline the “organization-oriented” system of Japan and the “marketoriented” system of Britain.
Much can be said for the orderliness, the mutual consideration, with which the Japanese manage their affairs; but they pay a price—the sacrifice of individuality and of independence.
The British preserve these virtues but in doing so they pay a price in suspicion, obstinacy, inertia, and what the author calls “a shifting mixture of complacency and national self-doubt.”
But the purpose of this book is not to judge but to explain—to give, as the author says, a causal account of the genesis of the reasons why there should be two all but identical processes of creating all but identical electric generators; two very different ways of ordering the social and economic relations among the people involved.