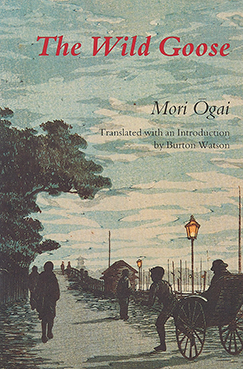 Ogai Mori’s famous 1913 novel is set in 1881, a time of vast social change, one which the author comments on in his story of the hopes and dreams lost as the Edo era slowly gives way to the Meiji period.
Otama is a young, hopeful, daughter, the only child of a widowed merchant, forced to become a mistress in order to provide for her impoverished father.
When she learns that it is a moneylender to whom she is promised, she feels betrayed and looks for a way of escape.
A neighbor medical student, her own age, could—she thinks—rescue her.
But whether or not the thought ever entered his head, he is off to continue his studies in Germany, and she is left hopeless behind.
The book is much admired not only for its grasp of the social changes that so affected Japan, but also for the fact that, unusual for its time, it so plainly sympathized with the dilemmas faced by women.
It has been several times rendered into English but this new translation by Burton Watson brings out the rich simplicity of the original style and makes appreciable the many subtleties of both the structure and the characterization.