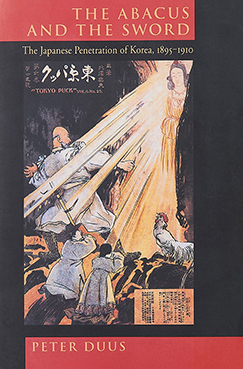 The Abacus and the Sword: The Japanese Penetration of Korea, 1895-1910

This is the definitive study of Japanese imperialism as directed toward Korea between 1876 and 1920.
Divided into two themes, the account first examines the political process of extending Japanese control, the second treats the economic penetration, one movement reinforcing the other.
Imperialism in its Japanese form was the country’s response to the presence of the Western imperialistic penetration into East Asia.
Japan wanted to find its own place in this lucrative practice and felt that only its own colonial empire would compel the Western nations to accept Japan as a fellow power.
The intention was, at first, to institute basic “reforms” in Korea, and to seize economic advantages for Japan.
The plan was to establish a protectorate in Korea and by 1904 the Japanese government had produced the consensus for an aggressive policy.
This move was backed by the assertion that it was necessary to its own security.
In fact, however, Japan had already defeated China and Russia and it had annexed Korea with the full approval of both Great Britain and the United States.
Security fears were more of an excuse, one used to justify aggression.
The result was a political and economic act the results of which still reverberate between the two countries.