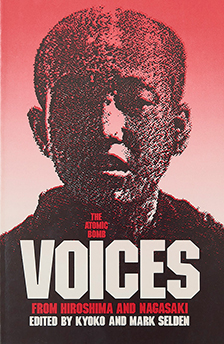 The Atomic Bomb: Voices from Hiroshima and Nagasaki

On August 6, 1945, at 8:15 a.m., the atomic bomb was dropped above Hiroshima.
It was a fireball with a temperature of several million degrees centigrade.
On the ground the temperature instantly became three or four thousand degrees.
One witness describes it.
The streets were “rivers of fire,” and “the people themselves blazed like match sticks.”
More than a thousand persons died and more than a million homes were destroyed.
By the end of the year the number had doubled—those dying of wounds and radiation, plus all of those killed in the second bomb dropping in Nagasaki.
The editors of this anthology have here collected the memories of those who survived and remembered.
“The memories of that day,” write the editors, “were literally burned into the consciousness of the survivors.”
Here they have collected what remains: accounts, interviews, anecdotes, a few poems.
They also reflect upon other, more political, results—the US attempting to create awe at the unique power it alone possessed and ready to deploy it again, the Japanese seeking to foster victim-consciousness “centered on the inhumanity of the bomb, thereby shifting attention away from Japan’s wartime criminally aggressive acts.”