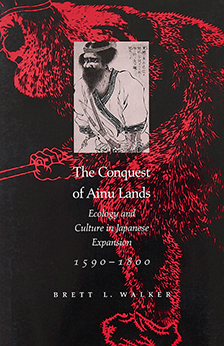 The Conquest of Ainu Lands: Ecology and Culture in Japanese Expansion, 1590-1800

By the beginning of the 17th-century the Ainu people were both economically self-reliant and politically autonomous.
Two centuries later they were neither.
Most of the Ainu lands—Hokkaido and the islands further north—had been conquered by Japan, sometimes through military action, mostly through manipulations of trade.
At the same time, the Ainu themselves facilitated the takeover.
The demands of Japanese trade created financial incentives for the Ainu to exploit their own territories.
The Ainu early united to fight against this intrusion, even at considerable cost of lives, but eventually the Ainu people were driven into smaller competing groups and soon their cause was lost.
By the late 19th century this outcome was acknowledged and both Japanese visitors and American advisors saw in the new northern colony of Hokkaido parallels between the fates of the Ainu and the American Indian.
In America this had lead to the 1887 Dawes Act, and it was this that provided a model for the 1899 Hokkaido Former Aborigines Protection Act.
The damage, however, proved fatal.
The culture had been fragmented and the ecology had been undone.
It was not that the Ainu had acquiesced to Japanese advances but that the Japanese means of subjugation proved so effective.