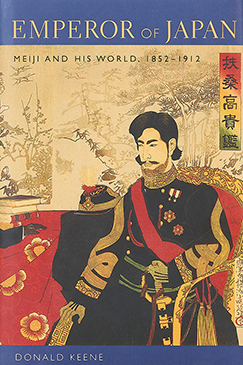 The Meiji emperor is most often portrayed as a symbolic figure, moved about and motivated by others in his court, a ruler with no will nor power of his own.
His long reign (1868-1912) is commonly thought of as having marked his country’s transition to modernity, but he is usually given little credit to its having accomplished this.
Donald Keene’s biography of this emperor examines his life and indicates what he did.
The rich detail of this account shows that he took part in the political and social affairs of his country and strongly influenced these events.
Despite his acceptance of modernism and, to an extent, Westernism, the Meiji emperor had an equally strong commitment to Japanese traditional life and its national morality.
What he did not support was the rising militarism of his country.
Even Japan’s adventures in Korea and in China met with little enthusiasm from him.
In this definitive biography Keene gives the full history of the Meiji restoration but he tells it not in terms of various forces challenging the feudal order (the usual interpretation) but in terms of the calculations and the motives of the individuals involved, including those of the emperor himself.