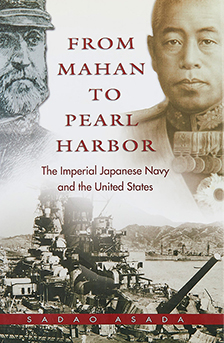 From Mahan to Pearl Harbor: The Imperial Japanese Navy and the United States

This major work by a leading naval historian begins from the influence of Alfred Theyer Mahan, whose classic study on sea power influenced Japan’s decision to empower their own navy.
This power was eventually used against the U.S., and so, in a way, it was Mahan’s ideas that allowed the Japanese Navy to see itself as a potential enemy of the Americans.
The work is not, however, about naval strategy nor is it a viewing of Japan’s national policy, nor the militarism it created.
Rather, it is a detailed history, based in many instances upon sources not hitherto available, of Japanese naval policy and its application to the war with America.
It was the military decisions of the Japanese armed forces that led to a war that took place in the important context of the bureaucratic skirmishes between the Japanese army and navy.
In this reading it was the “ghost of Mahan” that hung over Japanese commanders as they led their ships against the U.S. and made their incorrect conclusions about relative Japanese and American strength.
The Japanese Navy was responsible for its own defeat.
It was a victim of its past successes and decades-long bureaucratic sniping had sapped its strength.