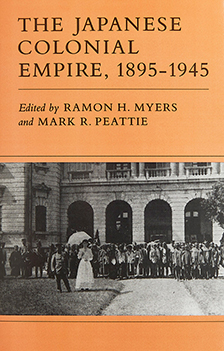 Product of a 1979 conference at Stanford’s Hoover Institution, this volume collects the contributions of thirteen scholars on the growth, collapse, and meanings of Japan’s overseas holdings: Taiwan in 1895; Karafuto and the Kwantung territories in 1905; Korea, l910; and Micronesia in 1914—all liberated when Japan surrendered in 1945.
Japan was the only non-Western colonist during this period and was a resented new-comer.
Japan thought of its colonies, however, as mainly security buffers.
It followed the examples of British rule over racially different peoples, and Germanic/Slavic expansions over peoples racially similar.
Actually, though, Japan gave neither the autonomy, implied in the British model, nor the homeland civil liberties and assimilation implied in the Germanic model.
Thus Japan received little thanks for its enterprising empire-building even (or particularly) when this was disguised as somehow saving smaller Asian countries from Western predators.
Divided into four parts, this collection first discusses the meanings and origins of Japan’s empire.
The following sections offer a chronological account of the results of initial Japanese assumptions, and how Japanese exploitation deepened in accordance with Japan’s economic needs.
Questions proliferate and are answered in an objective manner in this impressive volume.