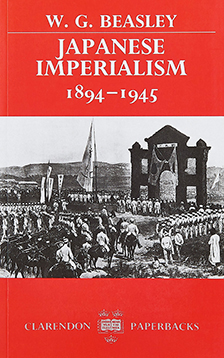 Japan is the only modern Asian country to have succeeded in building both a sound economy and (for a time) an empire.
It is the author’s contention that these accomplishments were related, that Japan’s aims were from the first influenced by Western imperialism and that its growing economy was matched by an equal growth in both needs and ambitions.
Of particular note is the attention that the author pays to internal political and economic reasons behind Japan’s stated policies.
In this manner the story of Japan’s economic rise to the 1945 debacle is made understandable and, indeed, inevitable.
Actual causes are revealed and only rarely is the self-serving notion of “Japanese culture” used at all.
In outline the story is a familiar one, but it has rarely been told in so concise and yet comprehensive a manner as it is here.
Japan’s response to modernism, its attempts at empire-building from the Meiji Restoration to the Pacific War, its intellectual justifications for such expansion as a “liberation” of Asian peoples from European colonialism, and the results for all this, are accounted for in a rendering that is neither pro-imperialist nor an apology for a colonial past.