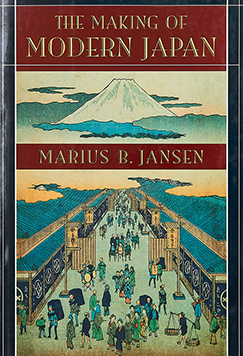 The Making of Modern Japan

This magisterial work represents the culmination of six decades of scholarship.
It chronicles Japan’s political, economic and intellectual life from 1600 to 2000 and in so doing it provides a solid, authoritative and reliable interpretation of Japan’s past and how this served as
foundation for the country as it is today.
Considered are the implications and results of three periods of social change: the imposition of hegemonic order by the Tokugawa shogun; the opening of Japan’s ports by Commodore Perry; and the defeat in WWII.
Charted are the social changes which begin with the founding of the shogunate in 1600, the emergence of castle towns with consumer populations, and the diffusion of samurai values.
This was followed by the adaptation of Western models, by growing trade and, eventually, by the postwar occupation reforms which were imposed by General Douglas MacArthur.
The history is one of changes but at the same time a consistency is present, one whose continuities outweigh developmental upheavals, and the waves of influence from outside have served to strengthen the Japanese sense of what is unique and native to it.
In telling this story the work offers a real social history—a history of how people actually lived in these times.