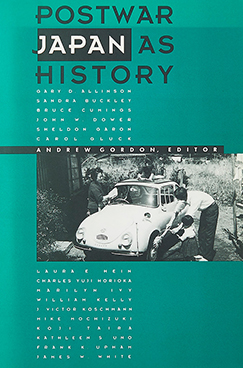 Japan’s rise to world economic power occasioned much comment, but few have considered this as a result of, among other things, history. Here, sixteen scholars do just that.
They examine three related themes from postwar history, all describing ongoing historical processes; Japan’s extraordinary economic growth and at the same time such unanticipated continuities as the endurance of truly conservative rule.
For over fifty years now Japan has been governed by a conservative hegemony that appears to sacrifice political pluralism to the necessities of economic growth.
The bubble grew larger and larger.
With the continued presence of U.S. economic comparisons, this gave rise to a kind of management culture, an ideology through which the people traded national wealth and industrial power for very meager increases in their own standards of living.
Pessimistically, one can see—as do a number of these scholars—the greatest discontinuity since the Meiji Restoration: the WWII defeat, the postwar occupation.
It is this discontinuity that represents Japan’s great problem, which is statis itself.
Optimistically, others believe that despite all the mistakes and accidents, the continuity of Japanese culture itself will provide the source for more versatility and for greater success.