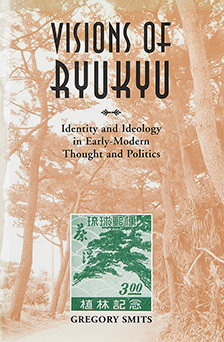 Visions of Ryukyu: Identity and Ideology in Early-Modern Thought and Politics

For centuries the Ryukyu archipelago (Okinawa and its adjacent islands) formed a semi-independent state with a semi-colonial status.
Japan laid claim but respected China’s tributary relationship.
Later, Japan (the Satsuma domain) invaded the place and in 1879 it was “annexed” to Japan but actually became merely its first colony.
It is now officially one of Japan’s prefectures but is still treated as somehow not full-fledged.
One of the results of these centuries of ambiguity (1609-1879) is that the people living on these islands had to craft their own “visions of Ryukyu identity.”
The author of this history explores the various notions of this held, in particular, by local scholars.
Through these the political implications of their visions are unveiled.
Smits explores historical perceptions of Ryukyu and the major circumstances that informed discourses on Ryukyuan identity.
At the same time he examines the various strategies used to fashion, to promote, and to implement these visions.
The ambiguous position between Japan and China inspired thought and eventually one vision prevailed.
The kingdom’s destiny lay with the Ryukyuans themselves.
Moral parity with Japan and China seemed at that time possible.