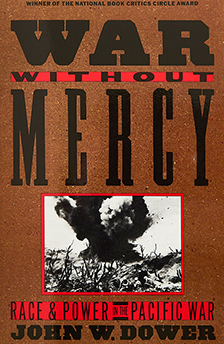 War Without Mercy: Race and Power in the Pacific War

In this important book the author examines the propaganda of the US-Japanese conflict in WWII to explore what he calls “the patterns of a race war.”
These include the deliberate structuring of racist stereotypes, the wide process of “othering” the other.
In doing so Dower discovers differences as well.
Whereas racism in the West is characterized by the denigration of others, the Japanese are concerned with elevating themselves.
Though not above belittling other races, they are more interested in wanting to believe they are unique among “races,” and that this has made them superior.
Consequently perhaps, they do not differentiate by color, at least not to the extent that does the West.
The Japanese use a different set of considerations.
There are, says Dower, the two categories of insider and outsider.
The Japanese are insiders; the non-Japanese are outsiders.
This is Japanese racism.
Combined with American racism it produced “the war without mercy.”
Such attitudes did not disappear with end of WWII.
Rather, they adapted to peace, for “the archetypal demon of Japanese folklore has always had two faces, being not only a destructive presence but also a potentially protective and tutelary being.”